Our latest CQC report below – ‘good’ in all five areas!

Follow the link below to view our latest CQC report:

Everyone with Parkinson’s has different symptoms.

The main symptoms of Parkinson’s are tremor, rigidity and slowness of movement.

As well as affecting movement, people with Parkinson’s can find that other issues, such as tiredness, pain, depression and constipation, can have an impact on their day-to-day lives.

Symptoms and the speed at which the condition develops will differ from one person to the next.

The symptoms can be controlled using a combination of drugs, therapies and occasionally surgery.

As Parkinson’s progresses, an increased amount of care and support may be required, although many people maintain a good quality of life with limited care or treatment.

A look at a new type of hoist

You’ll be familiar with Lilliput, but there’s another island Gulliver visits on his travels that has a more chilling resonance for our times. When he gets to Luggnagg, he learns about a group within the population there known as the Struldbrugs, who have what seems to be the great luck of eternal life.

At first, Gulliver is jealous. Jonathan Swift writes: “Happiest, beyond all comparison, are those excellent Struldbrugs, who, being born exempt from that universal calamity of human nature, have their minds free and disengaged, without the weight and depression of spirits caused by the continual apprehensions of death!”

The thing is, though, that eternal life is not all it’s cracked up to be. Permanent existence comes with no accompanying elixir of youth: the question is not “whether a man would choose to be always in the prime of youth, attended with prosperity and health; but how he would pass a perpetual life under all the usual disadvantages which old age brings along with it.” The Struldbrugs are not happy with their lot. “Besides the usual deformities in extreme old age, they acquired an additional ghastliness, in proportion to their number of years, which is not to be described.” 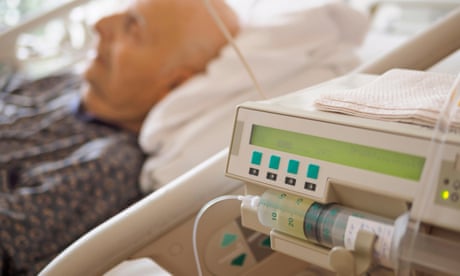 We’ll never live forever. But we’re tending in that direction. And so the way we think about death is increasingly important. Let’s pay close attention, then, to the British Medical Association’s major report on end-of-life care, which has just been published. The report makes a serious attempt to grapple with our thinking on the subject – which can still sometimes seem as if we’re in the grip of Gulliver’s initial fantasia; that sees survival as an absolute benefit, no matter what the cost.

After speaking to more than 500 doctors and members of the public, the report concludes that we sometimes keep treating terminally ill patients after it stops doing them any good – not out of any properly reasoned concern for their best interests, but because death means defeat. We’re culturally squeamish about death, and naturally this exerts a certain pressure on doctors; and family members, completely understandably, may struggle to accept that at a certain point, nothing more can be done. The report (which is a hefty piece of work, and which I should say that I’ve only read summaries of) quotes one doctor who says that once it is recognised that a patient is dying, the care they receive is good, “but for the patients who are dying but no one’s actually worked that out yet, it’s much less good”.

As the report points out, it’s intrinsically difficult to say when someone will die – even if they are terminally ill, and all the more so when they have entered a generalised decline that may presage death without giving evidence of a specific cause. But some of it is culturally conditioned, too: as Atul Gawande points out in his extraordinary book Being Mortal, one US study found that doctors overestimate terminally ill patients’ survival times by 538% – and that when they knew the patients well they were likely to make more hopeful predictions.

We all want to die on our own terms, and if so we should beware of landing responsibility at the door of doctors alone

One example of how this kind of magical thinking causes distress comes in the treatment of residents of care homes, who according to the report get a particularly bad time. In a care home, the doctors said, the reflex is always to call an ambulance when the patient’s health deteriorates. But if there were a recognition and acceptance that the end was likely to be coming, a plan could be made that would mean they could be cared for without being moved. The term “a good death” is a highly optimistic one, and hard to achieve at the best of times; but being shunted into a hospital to die alone instead of in the place you have come to call home seems like the opposite.

Some of this certainly falls to the medical establishment to fix. “Many doctors are reluctant to decrease treatment in a managed way as a patient approaches the end of life,” the report says. “It needs to be acknowledged that some doctors remain reluctant to make that call, associating a decision not to pursue further active treatment as an acceptance of failure.” But we all want to die on our own terms, and if so we should beware of landing responsibility at the door of doctors alone: if they are sometimes blind to our best interests, it is a myopia that is baked into every newspaper story of a miracle cure, every advert featuring a lithe young body, every promise that we make our loved ones that we will “fight this all the way”. It is a very hard thing to change.

As Swift puts it, even the oldest among us “have still hopes of living one day longer, and look on death as the greatest evil, from which nature always prompts him to retreat”. But death, however big the hole it leaves behind it, is better than being a Struldbrug.

As we enjoy longer lives there’s a test we’re all going to have to get used to: it’ll tell you how likely you are to get dementia , without a blood sample or gene mapping.

It’s a simple formula calculated from your age, weight, blood pressure, history of heart disease and the medicines you’re taking, all data your GP has.

Using this information, experts at University College London have ­developed a formula to calculate the risk of someone in their 60s or 70s developing dementia in the next five years.

The risk is expressed as a ‘dementia risk score’.

Data from nearly one million British patients over the course of 12 years was collected to calculate the algorithm that is used to come up with this dementia risk score.

Our CQC inspection is available to view online!!

Our CQC report is currently available to view online! View it here:

Dementia is one of the biggest challenges of our time. Last year, dementia became the third most common cause of death in the UK. Each year 225,000 of us will develop dementia. There are already 850,000 people living with dementia in the UK, and 1 in 20 of these are under 65. Many of our clients that have live in care are affected by some type of dementia, this article explains the link between diabetes and dementia.

“My search for a live in care package that met a budget, was able to accommodate a terminal parent and a critically disabled parent at the same time, with the target of keeping them in their own home, at first sight looked to be a very difficult one.

However, with Certain Care, it was possible not only to get a very professional live in Care, who had all the expected respect and compassion for an aging couple’s personal needs, but also managed their ongoing medical issues and changing OT requirements with an outstanding degree of professionalism.

The live in Carer was able to work effectively with the already installed care team, and as that team’s requirement altered, was able to adjust to the changing routines, suggesting improvements in comfort for my parents along the way.

I would like to thank Certain Care for its understanding and ability to deal with a very difficult period of our lives in an effective and caring way. I would very much recommend this company to families who find themselves in these kinds of difficult circumstances, and are looking for the best possible live in care solution to their needs.”

Maybe it’s the sort of conversation that you have when you reach a certain age. But I’ve lost count of those who tell me, often after losing an elderly relative, that there has to be something better than the desperate and humiliating mess that passes for our care system.

To those who have seen it at its worst, even Jeremy Paxman’s much-criticised euthanasia clinics on street corners don’t seem so bad. The number of those making living wills in the hope of ending their days with dignity has risen exponentially. Assisted dying may have been rejected by the courts and by the House of Lords, but popular pressure only grows. For some, a one-way trip to Zurich looks an ever more attractive option.

Could exoskeletons help disabled people to be more active?

New advances in ‘Iron Man’-style suits could one day transform the lives of wheelchair users. And that might only be the start…

On a weekday morning in June, 50 people gather at the launch of a new technology shop in a science park outside Cambridge. Dubbed a “store opening” by its hosts, the US firm Ekso, it is quite unlike most retail events. There are no shelves, tills, or counters; no free samples or catalogues.

Instead, Ekso suggests that guests – about a quarter of whom are in wheelchairs – might try out one of its devices, in conjunction with the private physiotherapy firm, Prime Physio. Then, in months or years to come, the wealthier among them could walk away with some of Ekso’s kit.

“Technology is reaching the point where those who have been disabled can be re-enabled,” says Andy Hayes, Ekso’s managing director for Europe, the Middle East and Africa, in his address. A slide of the bionic superhero Iron Man pops up on an accompanying PowerPoint presentation.

Ekso Bionics has produced one of the first ready-to-wear, motorised exoskeletons to be made commercially available in Britain. Called the Ekso, this battery-powered robot suit enables paraplegics to stand and walk.